Well, it's not fully a new technique for me, but as this is for crochet it is a new experience!

My sister LOVES owls, and loves to wear fingerless gloves. I have found many free patterns on Ravelry for knitted gloves with cabled owls, but I have never worked in the round with double points. Since I already know the basics of crochet, I'm trying them out!

This pattern is called "Owl Mitts" and is by Erika Ward. Link is to Ravelry, again. It's free, and if you're a knitter/crochet.. er..(?) then check it out!

I apologize in advance for the large file size. I've recently had to restore my laptop and can't resize images without major loss of detail. 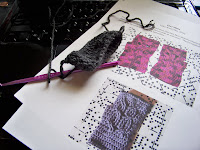 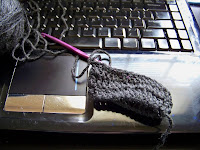 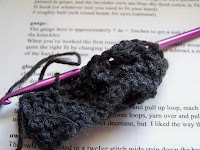 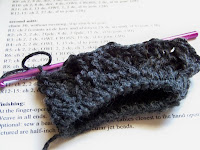 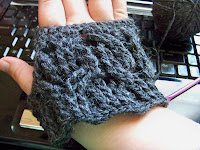 This is as far as I've gotten, and I've found that I'm doing one too many owl cables.

Hmm.. Now that I'm thinking about it, I'll be making my next glove in a lighter shade rather than Heather Gray, while trying to take some pictures of the actual technique. Hmm.. Perhaps I'll be able to do this today?

I do have some tatting pieces that are nearly finished, so pictures of those will come later. 'Till then!
Posted by Katherinne McKay at 10:45 AM