I have had this finished for awhile now, but wanted to share the end result.

Way back in April, when I got my first antique thread, I had been working on a secret project that was really close to being finished. Anyway, I'll let the pictures speak for me, instead of a long-winded ramble ;( 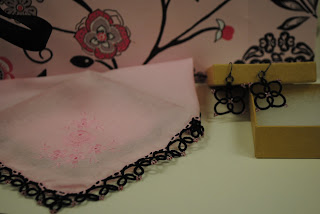 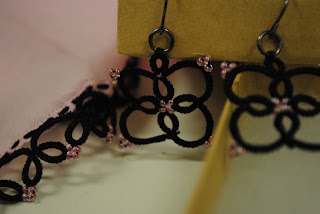 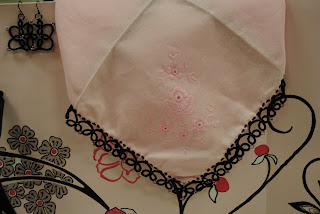 And, because I liked the bag.. 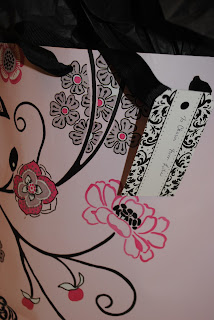 Happy tatting! ^^
Posted by Katherinne McKay at 6:58 PM No comments: Links to this post

Anyone else have this happen to them? I'm about halfway through the first round of the edging for my sundress, and lo and behold.. There be a knot that was tied in factory to splice the thread together.

I had loaded my shuttle so I wouldn't have any ends to hide, and even re-worked the pattern for it to be one shuttle with un-flipped stitches mock rings, and now this snag.

Oh, Lizbeth.. I love your colors, but I'm growing tired of these little grr moments..
Posted by Katherinne McKay at 3:02 PM 3 comments: Links to this post

I have been looking for some sun-dresses ever since we started getting them in at work. Let me tell you, some of the dresses we get in are totally adorable (though I have no hope of ever fitting in them.. Up to a size 12 in girls? lol), and shopping around I can't find any that are flattering as well as cute.

Cue last night, on a random pattern finding spree. I googled searched "how to make a sun dress" and got a bajillion results, but through surfing (using about.com, I believe..) I found this tutorial:

It's called the dragon dress because of the fabric she used. Wish I could get some of that fabric, but it's either too expensive or not around here, so after a trip to the local department store (need I name it? >.<) I came home with these fabrics:

Two colors instead of the one print.. Mostly because I want a solid strap and some lining to the bust. I love this fabric! ^^

While these are drying, I'm going to try to tat up a quick edge to go along the waist band. No promises, though if it'll be finished in time.

I'll post pictures of the final product and any tatting I may have been able to finish for it. Wish me luck!
Posted by Katherinne McKay at 5:23 PM 2 comments: Links to this post

And I had thought to combine several things in this one, but ended up not having quite enough to show.. -_-

I know it's been awhile since I've last posted, so I'm doing one big update. I've done quite a lot since I made the stitch markers, so here I go! ^^
Tatting
While I was in Mass with M and his family, I pulled out my white thread and got to work.. 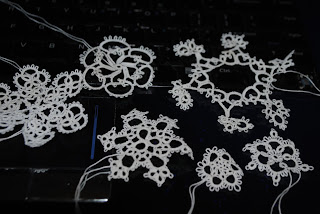 Several snowflakes were born! ^^
M's granny told me that one of her aunts tatted and she never got anything. These, as soon as they're dry are going in a box and being sent back to her as she was fascinated by them as I was tatting them!
Yes, I know they need to be cleaned and blocked.. I haven't found the time to do that yet, though I have a feeling I'll get it done later this week..
Spinning
I finally picked back up my drop spindles and finished this up from slimchicken: 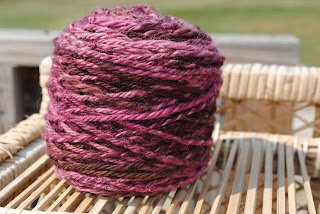 I don't know the exact yardage, but this has been blocked and wound into a cake. I'm not sure what I'm going to make of this, as I didn't get the yardage that I wanted from it. It's a thick/thin, sport weight chain plied, and is 4oz of superwash. There was a bit of fiber that was a little tangled and wouldn't straighten out when I pre-drafted, but I thought it turned out lovely anyway!
I have so many things planned for the next few weeks that I don't know how I'm going to fit them all in! I should have some more crafty goodness soon, so check back!
Posted by Katherinne McKay at 5:02 PM 2 comments: Links to this post