I'm really kicking myself at the moment -- Hobby Lobby had all their Lizbeth thread on sale for $2.66/ball. I managed to get two, however I didn't make it back in time to get some other colors. Ces't la vie, right?

Went to Michael's yesterday with my mom, and got a few new threads and thought that I would share what I have at the moment: 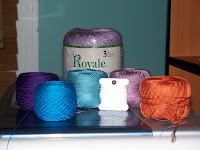 The skein of white is too large for me to handle, so I've wound some on a floss holder, as I have with several other colors that I've been using lately. This is also a partial list with the majority of my threads. All my HDT's are at home, but they have already been pictured on a previous post, as well as Lizabeth Caribbean thread which I have misplaced at the moment..

This is what I've been working on, though I've been pushing it to the side to work on other things. 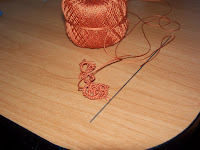 M has an aunt who is from Ireland and is a really, really sweet lady. I spent some time up with her as well as some other wonderful woman this past June, back when I had first started to tat. I
decided that I'm going to tat up some ornaments for these ladies, and right now I'm getting in some practice with weaving some celtic knots. This pattern can be found here: http://tatcal.wordpress.com/page/8/

Still trying to decide what all to send in the giftbaskets of Southern goodness, but I do know that some sort of jelly will be involved. Need to get the baskets and get shipping rates as well -- kinda need to know that so I'll know how much I can send!

Also, ran in to some problems with the ornament that I was working on and decided to re-start with a smaller thread: 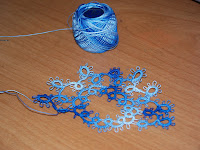 DMC size 80, with the smallest needle that I have. The stitches aren't laying right, but I suppose I will be able to fix this when I block it.

Not only is the first half too large, but I cut the threads without hiding them too short and it's starting to come unravled on the third round. Since the Christmas things haven't gone on sale at Hobby Lobby yet, I am trying this at a smaller scale (which looks to fit currently, however that could change at row 3). More pictures up of the orniments when I get the chance!

I've aslo got a few finished snowflakes to add: 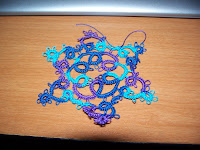 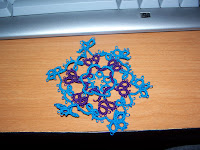 Both need to be blocked. The second one has some minor mistakes, and I will be making a new one sometime soon. The patterns are both in my book, however I don't have the link for the first one with me at the moment. The second one is located at:

I learned how to read a chart from Jon's page, though I had a bit of trouble with the Quantiesque because I was using a single needle instead of two shuttles.

Posted by Katherinne McKay at 3:06 PM No comments: Links to this post

School has started again, but that isn't stopping my attempts at tatting! Since it's so close to Christmas, I have started on some Christmas-y patterns, and this is the first: 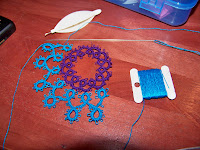 This is a beaded ornament by Debbie Arnold, and is the first that I have attempted to go on a ball. I will need to get a set of larger glass balls since the ones that I have are just a little too small..

As you can see in my picture, I'm tatting with a needle and using a shuttle that has a crochet hook at the end. The hook is smaller than my other full-sized hooks, and is perfect for this. I'm also using the thread that has been wound on a floss holder. The ball this was being tatted off of is getting a little wild since I'm so close to the end of it!

So far, this has Lizabeth Dark Purple and Bright Turqoise (I think). I don't have the numbers of them with me at the moment.. I might also use Carribbian when I get to the third and fourth rows. Haven't decided, since this is a sample project and is by no means going to be a final product.

There are many, many mistakes on this one, however I am only using one needle instead of two. More later!
Posted by Katherinne McKay at 11:30 PM No comments: Links to this post

But not taking a break from tatting, it seems.

We left this morning around seven-thirty, eight o'clock, and my mom decided to ask me to bring my tatting things. I've been trying to help her learn how to do this -- my great-grandmother tried to teach her while she was a child but all she could make were knots!

Good thing my workspace is so portable, otherwise I may go crazy trying to keep up with it all!!

Also designing in my office/craft space to get ready for this Christmas. I'm hoping that on the way home we can stop again at the flea market we stopped at before lunch and get some baskets -- M's family are all getting some good ol' southern goodness for Christmas this year!! I'm hoping to get some snowflakes tatted up for them to go with everything.. I've got a lot to do before then!!

Also learned a new way to knit, so everyone may be getting hats/scarves as well. Just need to get the yarn and I'll be good to go!^^
Posted by Katherinne McKay at 7:02 PM No comments: Links to this post

Firstly, I have been putting this off for awhile, but now I have no excuse not to! 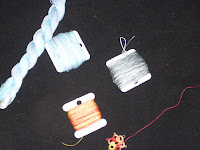 These are the HDT's that I ordered from Lady Shuttle Maker, and are these colors (clockwise from top-left): Icicle (size 20) x2, Shades of Gray (size 20) and Autumn Medley (size 80). The tiny tatted medallion is based on a daisy pattern that I can't remember where the pattern is, but is very easy to make! The camera doesn't do these threads justice; the colors are more vibrant than they look!

Also, was surfing earlier today, and ran across a post on another blog about posting pictures of where people tat. Since I don't have my office ready, I tat on my futon in the living room, and house all of my items in these boxes: 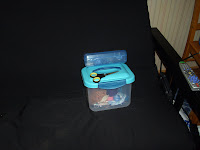 Sis and I are going to be going through a furniture swap in the next few days. I will be sayng bye to a wing-back chair to say hello to a fluffy blue recliner! I love that chair and can't wait to get it in place. Not sure if it will go in the living room or in the office, as it will most likely become my crafty chair.

More pictures to come as I get some projects done! ^^
Posted by Katherinne McKay at 4:34 PM No comments: Links to this post

I received my HDT's from Lady Shuttle Maker a while back, and can't think of what to do with them! For now, they are hidden away in my tatting box. Pictures up soon, as well as a pattern!

I finally was able to complete my first pattern, which I have no idea what to call! It looks like a sun when it's tatted up in a golden thread (which I have done, however I made a mistake and will need to re-do the tatted piece). Pictures of everything will be posted once I get some new batteries for my camera!

I'm also working on my crafty area, as my office is currently a mess overflowing with boxes from the move. It's been a year, and I still haven't fully moved in!

Now, it's off to lunch! ^^
Posted by Katherinne McKay at 11:37 AM No comments: Links to this post